How to Change a Test Configuration in the TFS Test Hub

If you’re using Team Foundation Server’s Test Hub for your QA testing effort, you’ve probably seen this annoyance.  All of your test cases say “Windows 8” in the Configuration column.  Windows 8?!? What is this? 2014?!  You’ll hit your next level of frustration about 20 seconds later when you find out that there’s no way to change this.

This is one of the things you can’t change in the web interface.  You’re going to have to open up Microsoft Test Manager (MTM) for this one.

This will bring up Microsoft Test Manager and you should see a screen that looks like this.

The configurations editor is a little buried.  First, click on the Run Settings tab.  Next, under Configurations, open the In this plan drop down menu.  You should now see a dialog that says Default configurations for new test cases.  Click the Manage link on this dialog.

To change the name, select the Windows 8 test configuration and click the Open button.

Step 4: Change the name of the Test Configuration

Back on the Test Configuration Manager screen, click the Manage configuration variables button.

You should now see the Manage Configuration Variables screen.  In the left panel, click on the Operating System line.  You should now see the list of allowed values in the right panel.  In the right panel, add the operating system values that you want (for example, Windows 10 and Windows Server 2016) and then click the Save configuration variables button.

Step 7: Edit the Test Configuration to use the new Operating System values 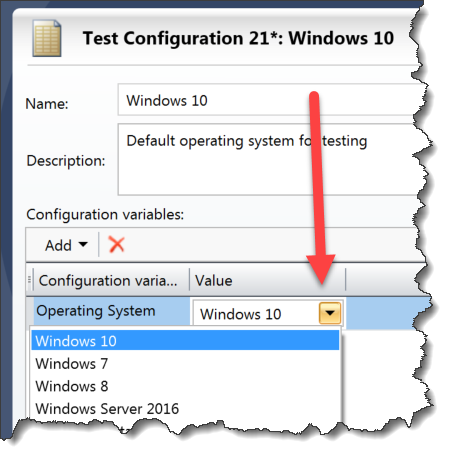 Ok.  You’re pretty much done in MTM.  Close MTM and go back to the TFS Test Hub in your browser.  Reload the Test Hub page.

All your test cases should now say Windows 10.  Problem solved.

— Want some help getting your QA testing effort into TFS? Need some training to get going with Scrum & Agile Testing? We can help.  Drop us a line at info@benday.com.