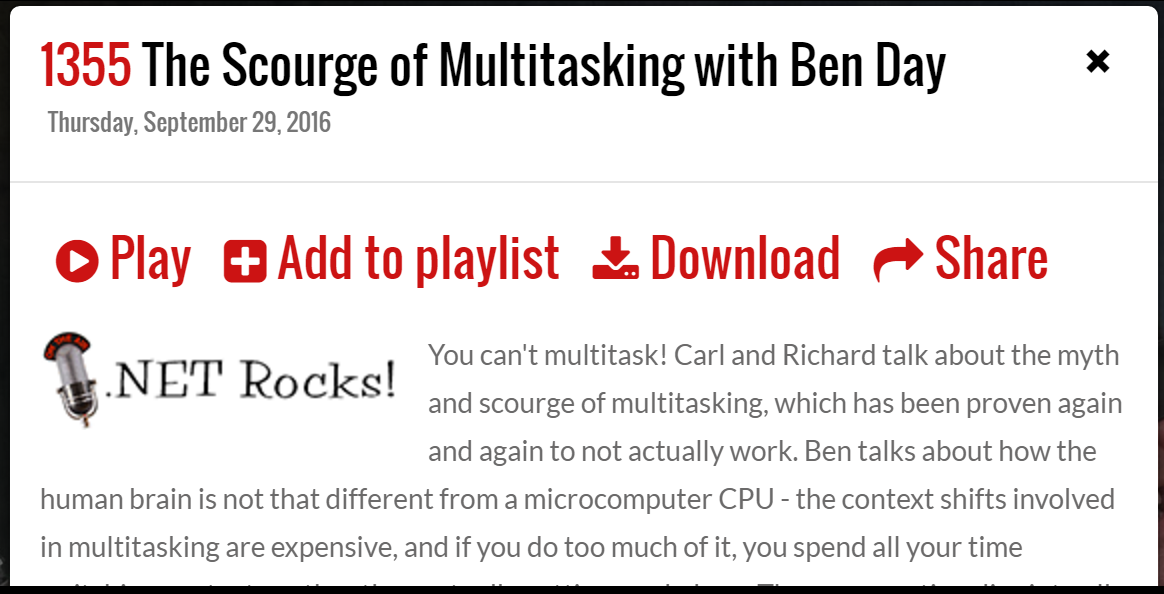 Carl Franklin and Richard Campbell invited me on their podcast a few weeks ago to talk about “The Scourge of Multitasking” and that episode just dropped this morning.  The conversation covered a lot of ground.  We started off with how multitasking can crush your team’s productivity, talked about burnout, talked about focus, what “Done” actually means in Scrum, and wrapped up with the Theory of Constraints and Gene Kim’s book, “The Phoenix Project”.  Along the way we talked about how much a kayak looks like a seal to a hungry shark and also the possible (dubious) benefits of slamming your fingers in a car door.

You can’t multitask! Carl and Richard talk about the myth and scourge of multitasking, which has been proven again and again to not actually work. Ben talks about how the human brain is not that different from a microcomputer CPU – the context shifts involved in multitasking are expensive, and if you do too much of it, you spend all your time switching contexts, rather than actually getting work done. The conversation digs into all sorts of good discussion around productivity, but first and foremost, it is about getting things done – focus on one task until you’re finished, then move on!

Here’s a link to the burnout episode of the New England Journal of Medicine podcast that I mentioned.  Also, my Pluralsight DevOps course has launched since we recorded this episode — here’s the link.

.NET Rocks Episode 1355: The Scourge of Multitasking with Ben Day

— Are your teams having trouble with focus and multitasking?  DevOps got you down?  Thinking that Scrum might be what you need?  We can help.  Drop us a line at info@benday.com.

One Response to ".NET Rocks Episode: “The Scourge of Multitasking”"